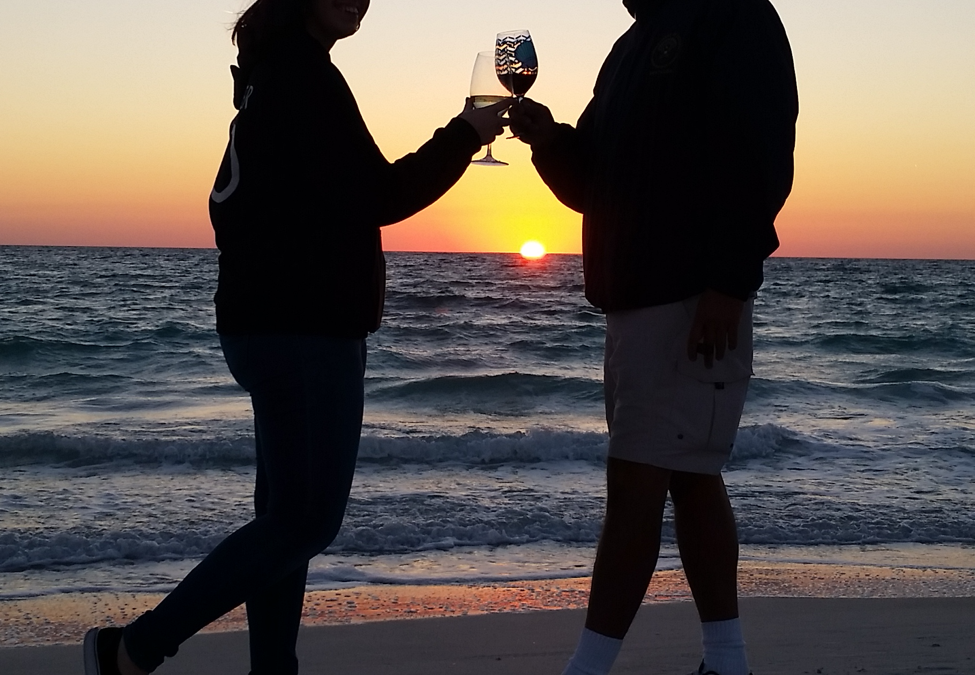 Refreaving?  What is that?  I was a military brat for 13 years from birth.  Dad was a marine and we were never in one state for more than 2 or 3 years.  That made it difficult to keep friends and I was not one to write letters or think of relationships at that young age.  I went to high school and college in Michigan after he got out of the military, but as soon as I had my degrees I quickly moved some place warmer, the Washington, DC area.  I moved around the DC area from Maryland to DC to Virginia.  My husband, then an FBI agent, was at the whim of his “military”.  We moved to the Dallas, Texas area for 3 years then back to headquarters in DC. I now live in Florida. I’ve lived in a lot of states.

When people ask me where I’m from, I tell them the United States because I have no “home town.” Most people can say they are from somewhere.  Many of my friends had the opportunity to live in one place and now have friends that they have known since they were born.

How am I so lucky to have friends that I can talk to like we just talked yesterday?  Even if it had been more than ten or fifteen years between? Susan McDonald1 calls this a “picking up where we left off” lifetime kind of friendship.

Larry, my dear friend from Texas, emailed that he will be in town for 24 hours.  I had not seen him in over 10 years and of course, I said “Come on Down!”  When he walked in the door, I gave him a big hug and we talked like he was just here yesterday.  We had both gotten “blonder” hair but, still had our back and forth banter.  This is when I realized that I have quite a few friends where I can “pick up where we left off”.  In fact, I knew that Larry would be the perfect person to help me figure out a word for this concept.

We went back and forth on the word “re-connecting”, but this concept of “picking up right where we left off” encompasses more than connecting. In fact, we didn’t even need to connect at all.  The connection was already there.  Then, there was the idea of time or the lack of time passing.   He called it “time losing its length.”  We decided that there is no word for this, so he and I floated many ideas in the air between us.  It is amazing how Larry and I, two extraverts, can actually “see” ideas “floating” in the space between us.  Fortunately, for me, I have a few friends with whom I “bat around ideas.” But, that is a subject for another blog.

The two of us decided that soldering and bonding were good words but we landed on weaving.  Friendships are woven and we can keep weaving new material into the tapestry of our friendship.  So, we settled on friendship and weaving…Freaving.  But, we still needed to add the concept of “time losing its length” and meeting again.  Refreaving is what we decided to call our new word.

Refreave is the new word to use to stand for the “picking up where we left off” in a relationship after much time has passed.  It can be used in many different instances.  For example, my friend Robbin and I see each other about once a year, at one point it had been over 10 years.  We seldom talk on the phone or text but when we do see each other, we experience refreaving. See?  This word describes the concept in only one word and not an entire phrase.  Larry and I talked about how we refreaved on his trip to Florida.

Is there another word to express this concept or have we created a new word?  I challenge you to find that one word or to jump on the bus to new word creation!  The young adults and teens of today are creating all kinds of new words.  I was “on fleek” the other day – or was it just my eye brows?  How about “buddymoon?”  This describes a honeymoon to which the married couple’s friends are invited. And we can’t forget all of the words made up because of technology such as:  google, laptop, flash drive, cell phone, iPad, PowerPoint, email, and many others.

Let me know some other words that are brand new.  Share a concept or idea that needs a new word.  Let’s get going!

The Learning and… Blog is for enhancing knowledge about self-awareness, emotional intelligence, strengths, employee engagement, team building, and personal and professional development.