Is she drowning? Ethics on the beach. What would you do? Part 2 of 2 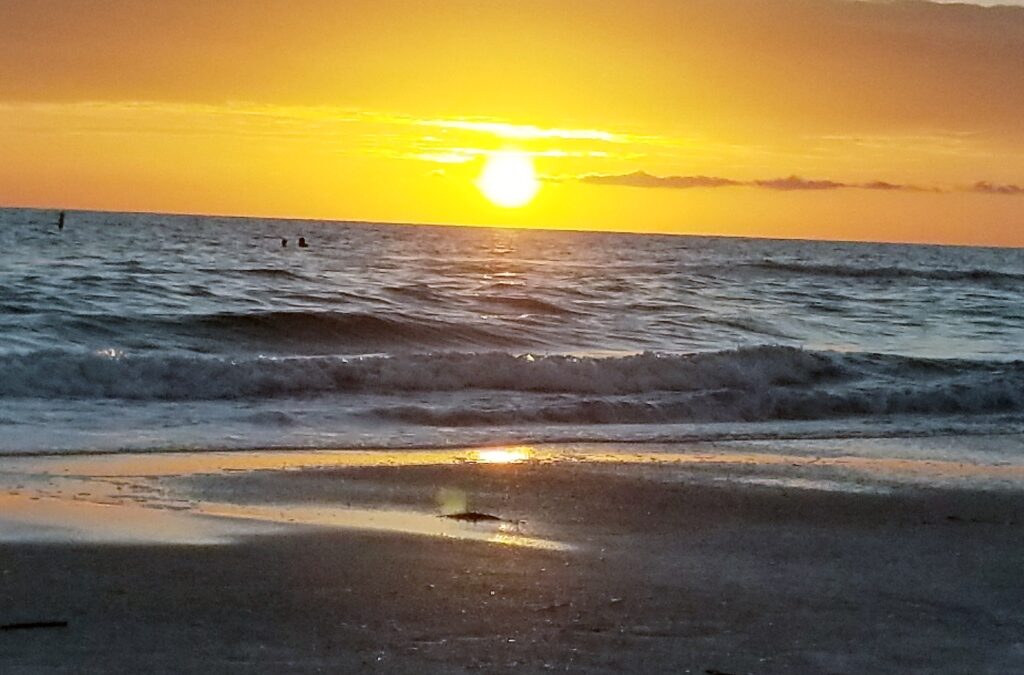 In my last blog I told the story of my very strange and scary 4th of July experience.  I was sitting on the beach with my boyfriend and my wine watching the sunset.  I noticed a woman dressed in shorts and a bikini top.  She had long brown hair that was loose down her back.  She started to swim out into the gulf of Mexico.  There were other people in the water as the sun was going down, but they were within the waves breaking close to the shore.  This woman swam out past the buoys, past the boats, past what I deemed was safe.  I was the only person who noticed that she was so far out – others were watching the sunset and now the fireworks were starting.  She swam so far out that I could only see her head as a shadow far out in the water.  I thought that she may be trying to kill herself.  I asked in my last blog – What would you do?

I was not panicked.  I did not scream.  She was too far away to hear me anyway.  My boyfriend suggested that I call 911 earlier.  Now, she was very far out and it did not look like she was going to turn toward shore.  I could not see her head any longer.  It seemed like she had gone too far.  Then I saw what I thought was her head.  I called 911.

I told the operator where I was and where the woman was.  She asked me some strange questions as I kept trying to see the woman’s head bobbing between the waves.  “Is anyone hurt?” “Uh no”.  “OK, I just have to ask”.  She told me she was sending a rescue vehicle to the beach.  I told her which road was closest to the woman.  She asked me if I could still see the woman.  I said not really.  She was drifting to the south, down the beach.  I started walking south down the beach so I could keep her in sight as the sun was setting.  It was getting darker and it was harder to see what I thought was still a head.  I felt stupid calling 911.  I told the operator that I was not sure that the woman needed help but I was worried.  She said that she was glad that I called because someone was swimming on that beach last week and went out and never returned.  “please stay on the line” she asked me.

It was dark and I could see lights from an ambulance down the beach.  They were too far away.  They would never be close to where this woman was last seen.  I continued to walk down the beach so I could be in line from where I last saw her.  But, she was still too far south.  It seemed that she was between the lights of the rescue vehicle and where I was walking.  I walked faster.  There were so many people on the beach now watch the last of the sunset.  The sun was down but the blues and pinks and oranges were painting the sky.  I was not feeling anything.  I was watching and listening to the woman on the phone.  I answered questions and kept walking down the beach.  Then, it looked like the woman’s head stopped bobbing, I could see her arms moving.  Not, calling for help but swimming – turing toward shore and swimming.  “Wait!” Then I could not see her arms or her head anymore.  I saw dark; dark waves, dark sky and dark water.  “what do you see?” the 911 operator asked me?  “nothing”  It is too dark.

I saw the lights of the rescue vehicle far down the beach.  I kept walking to where I last saw her.  I was still about 50 feet down the beach away from her.  Then I saw someone in the water, swimming slowly toward shore.  No arms were coming out of the water, the swimmer was just floating to the south and sort of “surfing” on the waves coming into the beach.  Then, they were on the sand bar.  Foot touching sand.  I saw the person coming out of the surf.  On to the beach.  “I think she just got out of the water”.  “I think that is her!”  She started walking toward me up the beach.  “I am going to go up to her”.  “Are you safe?” the operator asked.  “UH yes”.  As I got closer, I noticed the long brown hair dripping wet down her back.  She was wearing shorts and a bikini top.  She did not look in great shape to be swimming for sport.  I went up to her.  “Were you just swimming way, way out there?”, I asked.  “yes”.  “You scared the S***  out of me.  I called 911”.  “oh sorry” she said and she walked past me up the beach.  She seemed ok.

I was relived but stunned.  I told the 911 person that I will hang up now.  She told me to stay on the phone until the rescue people could find me.  The lights were still down the beach.

After this experience was over I took inventory.   I realized that I felt that I made the correct decision.  I called because I was very concerned that she would drown.  No one on the beach saw this happen.  Or did they see it and just ignore?  Later a friend of mine told me that her neighbor killed himself by swimming out and never coming back.  Someone reported it and his family had closure.  They never found the body.

This experience led me to examine my decision making, my feelings, and my faith in other humans and myself.  After a week I have decided that I did make the correct decision.  I am confident about that. If she did not return I would have felt that I should have done something.  I would have felt responsible.  I am still processing my emotions and feelings.  But, at the time, I was calm even though I could think of the worst outcome.  Looking back, I wished I would have asked her, “what were you doing?” but at the time it did not seem like the right thing to do.  She was exhausted and not ready to talk as she walked back up the beach.  I let her go.  Should I have followed her?  I still do know if she is a troubled soul or if she gets her exercise by swimming with the sharks in the dark.  I don’t know if I have faith in others.  Why did no one else see her swimming so far out.  Of   course someone must have seen her – but did nothing.  Then went back to their families and friends – after all, it was a holiday at the beach.  The fireworks were starting.  As far as the faith in myself; I feel as if it were some type of a test.  I have had other experiences where I did not do what I would have expected myself to do – where something happened too quickly; where I did not say what I should have said, where I did not defend someone as I wish I would have done.  But, in this instance.  I did.

When you think about all of the times that you were “tested”.  When you had those experiences where you had to make a quick decision, a tough choice or say the right thing.  Did you want to but could not?  Did someone else step up as you sat there quietly?    Or did you take that risk because you were responsible or because you knew it was the right thing to do?