Is she drowning? Ethics on the beach. What would you do? Part 1 of 2 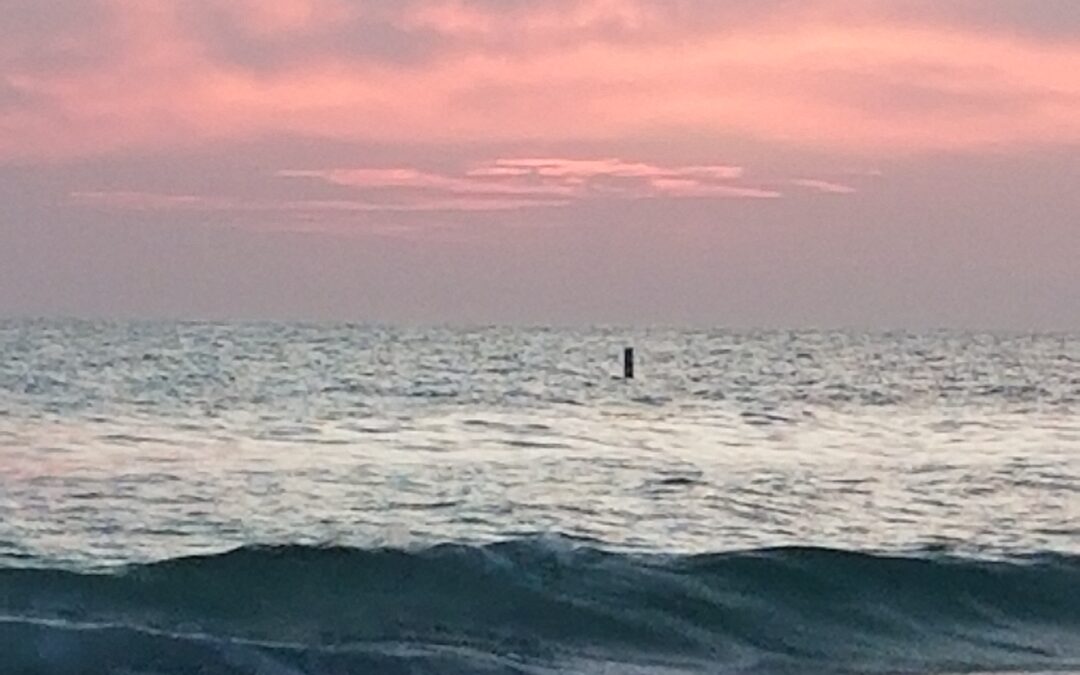 I had no idea that ethics would play a part in my holiday. It was the 4th of July and I went to the beach to see the sunset – yes – and the fireworks; Little did I know that I would be tested with an ethical dilemma.  My man and I took our beach chairs and sat down right by the water’s edge.  It was a warm evening with a beautiful breeze.  The sun was setting.  In fact, it would set at 8:29pm.  It was 7:55pm at the time we nested in to watch the sunset.  What happened next was not expected.

There were people in the water swimming.  All I could think about was that sharks usually feed at twilight.  I was hoping everyone would be just fine on this beautiful night.  An inner tube was floating away from some people.  It went past the buoys where the swimmers were to stay so the boats could not pass into the swimming area.  The raft/tube drifted out and to the south; it was drifting farther and farther away.  No one seemed to care or want that float.  Who did it belong to?   I was curious, but not enough to swim out to get it.  The tide was taking it out.  I noticed a woman/girl in front of me in the water.  She had long brown hair and was wading in the waves with other people.  What was different about her was that she was wearing shorts and a bikini top.  Most people don’t wear shorts in the water, but this is Florida and to each his/her own.

This woman started swimming out farther than the other people.  She went past the buoys.  As an ex-lifeguard I realized that she was not being safe.  She was all alone.  I was taught the “buddy” system of swimming for safety.  Was she going to get the floating inner tube?  It was very far away and was floating faster than she could swim.  I said something to my man.  He started watching her too.  Soon, all we could see was her head against the waves.  She was VERY far out in the water.  What should I do?  “You should call 911”, he said.  I noticed he did not get his phone to call 911.  Was she trying to commit suicide?  Did she get caught in the riptide?  Now, I could not see the inner tube float any longer.  It was too far away – gone from sight.  Gone.  I could still catch glimpses of the woman’s head floating in the waves.  There was a boat near her.  Will it hit her?  Does she see the boat?  Is she swimming toward the boat?  I asked myself questions as I watched.

No one on the beach seemed to notice this woman so far from shore.  The people on the beach were watching the sunset and getting ready to watch the fireworks.  I seemed to be the only person concerned that this woman may die.  She was not panicking.  She was not waving her arms to signal that she was in distress.  She just kept swimming out farther and farther.  Then she started drifting south like the inner tube.  Out farther and to the south; down the beach away from me.  Did the tide take her like it took the float?

These types of events don’t happen to us every day.  We don’t have to make life and death choices but when we do what do we rely on?  I choose to rely on my emotional intelligence.  How was I feeling at the time?  Could I name my emotions?  I was afraid for her, I felt helpless and confused.  I was afraid but curious.  I did not panic.  This moment seemed so surreal.  The sun was setting; it was getting dark – golden in the sunset but darker.  I kept trying to see her between the waves.  I had so many questions and I wanted answers that were not available.  Where were her friends?  Her family?  Why was she alone?  What is happening?  How nervous am I?  Is she going to die?  I realized that I needed to make a decision that I had to live with the rest of my life.  Ignore her and let it go?  Start yelling and get the crowd to see her.  Swim out with a raft to get her?  Call 911?  What would you do?  I took a breath, sat down and made my decision.