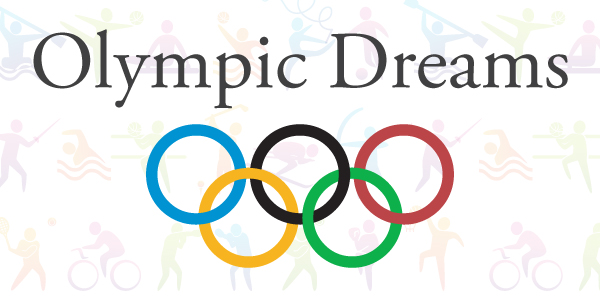 Louise Hay is the queen of affirmations. I am motivated by the thrill of victory and the agony of defeat.  Yes, the Olympics teaches us so many things about human behavior, motivation, and discipline.  I am amazed by the tales of athletes thrills and agony. Every two years I realize that I learn more about myself and life as I watch the Olympic dramas for two weeks; night after night.

First, the thrill of victory is ever present in the snowboarding this year.  Red Gerard is only 18 and from Cleveland, OH, not Colorado.  This young man won the gold medal in snowboard slopestyle.  He looked so grateful as he hugged his coaches and teammates before he started his run.  When he finished he hugged another teammate while waiting to hear his score.  When he finally heard that he was in first place his family went crazy with celebration.

Chloe Kim, another young Olympian was the favorite and she has the soul of a champion.  She knew that she did not have to do anything to win at the beginning of her last run.  She already had the gold medal, but she would not settle for just “OK”.  Chloe took a deep breath and relaxed.  She seemed like she was having the time of her life.  She spun and jumped and slid to the highest score so far, even beating her gold medal score of her other runs.  She was not satisfied with her score; she knew that she could do better.  She did much better.  The judges were amazed as was the entire audience.

Now about the agony of defeat. Shaun White, the 31-year-old veteran, already had 2 Olympic gold medals, but not from the last two games.  At the 2014 games in Sochi, Shaun got 4th place.  He was devastated because he was (of course) favored to win the gold again.  As I watched a documentary about him, I was surprised by his recent change of character.  He used to be a brash young man who became rich and famous after the first games.  He is the father of snowboarding.  He constantly bragged about his house in Malibu and showed off his riches.

Of course, the documentary did not touch on the alleged sexual harassment charge, it focused on his defeat.  Not only was he defeated in the Sochi games but months earlier he landed on his face during a competition.  It is his job to fly 12 feet into the air but this time he landed on concrete ice; he got a face full of stitches.  He seemed to be at his low point in life.  However, he commented that he was grateful that he lost and was injured.  He stated that he learned so much and it made him want to win more.  He said that he did not train harder physically; he changed his mindset.  He had been beaten for the first time. He was humble, quieter, and more thoughtful.  Mr. White seemed more mature after his devastating experience.

Now, of course, if you or I got 4th place in the Olympics we would not call this a devastating experience but for a two-time previous gold medal winner and expected favorite – this was not expected.  As reported this experience of being at his lowest low changed his life.  Now, this agony of defeat story does have a very happy ending.  After a bit of drama, Shaun White won the gold in 2018.  Not only did he win, he earned it.  He may have settled for the Silver Medal but he gave his very best not to be defeated by a 17-year-old Phenom from Japan.

My favorite Olympic story is about self-doubt.  Mikaela Shiffrin, a favorite to win at least two skiing events, shared a story about her anxiety on the slopes.  She would get very nervous before her ski runs and vomit at the top of the hill.  She went to see a coach to learn more about her anxiety.  She realized that she wanted to be the BEST skier in the world and realized how much that meant to her.  She was afraid of not being the best.

The coach taught her affirmations.  This is interesting because when I teach I tell my classes that being positive and having a good attitude is a learned skill.  My favorite phrase is “Now, let me teach you the most powerful words in the English language.”  Those words are “I am”.  If you put those two words in front the words you desire; an affirmation is created.  For example, “I am powerful”, “I am good”, “I am confident in my abilities to _____.”  Mikaela’s coach taught her those same words.  I heard her state her affirmations on TV last night.  “I am good”, “I am confident” “I want it.”  This skier even has the words “I AM” written in Sharpie on her green ski gloves.  It gives me hope and motivation to continue my affirmations and tapping exercises.

I experience self-doubt and end up procrastinating to not produce the results that I know I can produce. Most people I know have told me they self-sabotage at times.  Most of this is not planned.  I do not want to slow down my success consciously.  I am not even aware of why I procrastinate, delay or not do a task that I know will lead to my success.  But, I am aware that I do this behavior.  As they say, “awareness is the first step” (to behavior change I assume).  I will continue to repeat my affirmations, my mantra, and tapping exercises in the hopes that my behavior will change and I will reach my goals successfully.